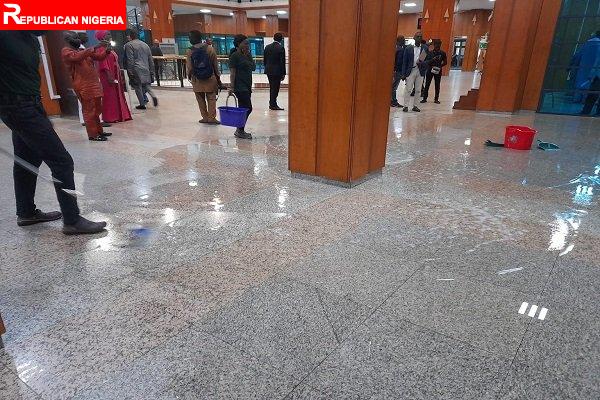 Nigerians are angry that Tuesday’s rainfall flooded the Senate wing of the National Assembly due to leaking roof despite N37 Billion allocated for renovation in 2019.

Cleaners worked frantically to mop the flooded floors as water poured in from the roof into the lobby, disrupting parliamentary business for the day.

Federal Executive Council (FEC) had allegedly raised concerns on possible shady deals in the renovation project, causing President Mohammadu Buhari to call for a review of the whole process.

Widespread criticism trailed the allocation of N37 billion for the renovation of the National Assembly Complex in the 2020 Budget.

However, Director-General of the Budget Office, Ben Akabueze, admitted that only N9.2 billion was provided for renovation/retrofitting of the National Assembly (NASS) complex in the revised budget as against N37 billion.

“The initial provision of N37bn in the 2020 Appropriation Act for this was cut by 75 percent due to the impact of COVID-19 on government revenues,” Akabueze said.

Meanwhile, some Nigerians have insinuated that the roof was deliberately punctured to pressure the federal government to remove hurdles put in place to ensure due process in the renovation project

While this is a plausible reason given Nigerian politicians penchant for misappropriation and embezzlement, Akatarian is yet to get evidence of a deliberate damage to the roof.

In reaction, the Senate has urged the Federal Capital Territory Authority (FCDA) to expedite action on the renovation of the National Assembly complex to stop the leaking of the roof during the rainy season.

Sen. Sani Musa, Chairman, Senate Committee on Services told the News Agency of Nigeria (NAN) on Tuesday that they are surprised that the FEC delayed the project due to a review being carried out after both the National Assembly and FCDA have done the needful.

“Surprisingly however when it got the Federal Executive Council (FEC), one of the ministers made a remark, which made the president tobask for the review of the whole process and today, you can see what is happening with the complex,”

He noted that the complex is flooded and there’s leak everywhere. “I will call on the FCDA, I will call on FEC to take a look at our submissions and do the needful.”

“And we have done the needful. Instead of the national assembly management to handle this project, this project was domiciled in the FCDA.

“The FCDA has done the needful; they have called for bids; they have done all the necessary things; they have gone to Bureau for Public Procurement (BPP) and no Objection Certificate has been issued,” he said.

Akatarian learnt that the Federal Government initially budgeted N37 billion for the renovation of the NASS complex, a capital allocation fixed under the Federal Capital Territory Administration (FCTA) budget.

Analysis of the revised 2020 budget showed the allocation was cut from ₦37 billion to ₦9.25 billion, despite calls by Nigerians for outright removal.

Many Nigerians expected the Federal Government to adjust proposed spending in line with economic realities and dwindling revenue.

Meanwhile, two federal lawmakers had also criticised the outrageous allocation for renovation of the building.

They said though there might be a need to upgrade their Speakers wing and the voting system, but not to renovate the entire building.

For Akin Alabi, it will benefit Nigerians more if government spend N37 billion on education and healthcare.

‘I think BLM Movement was used for election’- Putin