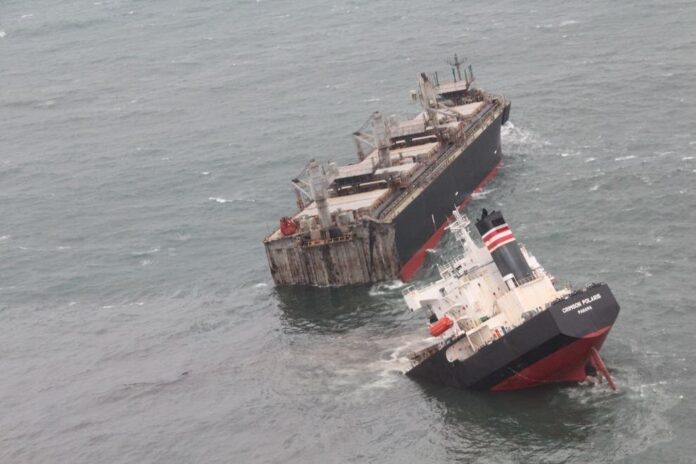 A Panamanian-registered ship split in two after it ran aground in a northern Japan harbour.

But there were no injuries among the 21-member crew already rescued. And the oil leak was being controlled with no signs it had reached shore, according to the Japan Coast Guard.

Efforts are being made to bring the oil leak under control, officials said.

Similar incident occurred in July, 2020 when a Japanese cargo ship ran aground off the coast of Mauritius and split in two.

In that incident, the ship spilled 1,000 metric tons of oil into the Indian Ocean. This endangered coral and marine life, and some ecologists called it the worst ecological disaster in the island nation’s history.

Polaris was transporting wood chips from Thailand before it ran aground in Japan’s Hachinohe harbour.

It managed to free itself, but due to poor weather was unable to move far and ended up anchoring about 4 km (2.4 miles)out from the port.

Almost 24 hours after it halted, a 5.1 km by 1 km thick strip of oil leak from the ship began and appeared in the hull on Thursday morning, the Coast Guard said. Containment measures by patrol boats are underway.

The vessel’s two parts have not moved and are being closely monitored by patrol boats, and by late afternoon there had been no apparent major change in its situation, a Coast Guard spokesman said.

Square set to buy into Tidal in a $297m deal

Leaked photos reveal the conditions at migrants detention centers in the...