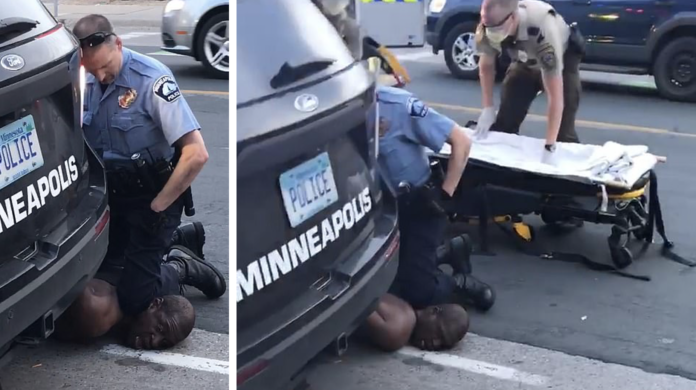 The Federal Bureau of Investigations, FBI is reportedly investigating the heartless killing of a black man by a white officer of the Minneapolis Police Department, MPD.

The black man identified as George Floyd died after officer Derek Chauvin used knee to pin down Floyd’s neck for several minutes. He cries out and says, “I cannot breathe,” while the officer continues to push down on the man’s neck with his knee. until he became unconscious.

A viral video of the incident also show another officer who stood by blocking bystanders from distracting Chauvin, who was apparently determine to kill Floyd.

Floyd appears to become unresponsive after he has been pinned to the ground for several minutes. Bystanders plead with police to check Floyd for a pulse. “He’s not even resisting arrest right now, bro,” one person is heard telling police.

Eventually, police and first responders are shown moving the still-unresponsive, handcuffed man onto a stretcher.

Minneapolis Mayor Jacob Frey said the four MPD officers involved in the death of the black man in police custody have been terminated.

The FBI and Minnesota’s Bureau of Criminal Apprehension are now investigating the incident, which could include potential civil rights violations, Frey told reporters on Tuesday morning.

“I’ve been trying to find the words to describe what happened. All I can come back to is that he should not have died. What we saw was horrible — completely and utterly messed up. This man’s life matters,” Frey said.

He said “Being black in America should not be a death sentence. For five minutes, we watched as a white officer pressed his knee to the neck of a black man. … When you hear someone calling for help, you are supposed to help. This officer failed in the most basic human sense.”

“The lack of humanity in this disturbing video is sickening,” Minnesota’s governor, Tim Walz, wrote on Twitter.

The MPD attempted to downplay the wickedness of the police officers. It said in a statement that an altercation occurred in South Minneapolis on Monday evening. It said officers responded to a report of forgery in progress. The police department said a suspect was sitting on top of his car and appeared to be under the influence when police ordered him to step away from the vehicle. According to the statement, he “physically resisted officers.”

“Officers were able to get the suspect into handcuffs and noted he appeared to be suffering medical distress. Officers called for an ambulance,” the department said. “He was transported to Hennepin County Medical Center by ambulance where he died a short time later.”

Police said that no weapons were used by the officers or the man during the encounter.

Senator Amy Klobuchar has condemned the incident and called for justice to be done in a statement released on twitter.

Amnesty International USA called for the police officer involved to be held accountable for what happened, citing circumstances similar to those in the death of Eric Garner in 2014. Garner also famously said he couldn’t breathe as he was being apprehended by police in New York.

“We are incensed that nearly six years after Eric Garner uttered ‘I can’t breathe’ as he was killed by the New York Police Department, police officers still don’t seem to have learned to listen to a person’s call for help,” Amnesty’s Kristina Roth said in a release. “The police must be held accountable for this use of deadly force, that may also violate the department’s own policy.”

Nearly four years ago, another police department in the area faced criticism for an incident in which an officer killed black motorist Philando Castile.